Hammer Instead of a Scalpel: Brute-force AV Evasion

Several years ago, I was on an engagement with Skip where we were faced with the common problem of antivirus evasion for callback binaries. The environment was such that we feared that any custom backdoor or tool would be submitted to an AV vendor so we wanted to use Meterpreter. Obviously, this was before the golden age of PowerShell. Skip suggested that we generate hundreds of payloads and scan them locally to see which ones bypass the target product. We knew what the product was, but there are some awesome ways of figuring that out. I felt pretty educated on the topic and concluded that his idea wouldn't work since encoding didn't really matter for executables.

He threw together a bash script to generate payloads overnight and we returned to find around 10 viable binaries that all had different hash signatures and worked:

I have used this method to general success ever since, but given what we know about how encoding shouldn't really matter, why does this work? I don't know. My best guess is bad signature writing for a known security tool.

We even took the concept even further when facing multiple products: 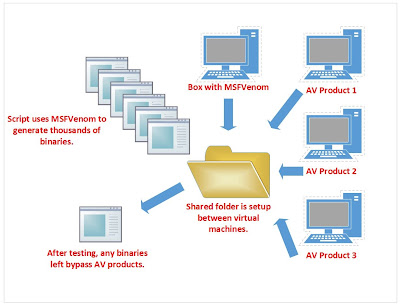 Testers tend to keep their AV-evasion methods to themselves for obvious reasons, but with the tools available now it's not a huge deal. I am really writing this post to get thoughts as to why this still works. So the script that Skip wrote works, but I really wanted to speed up the process and start up the handler for testing: 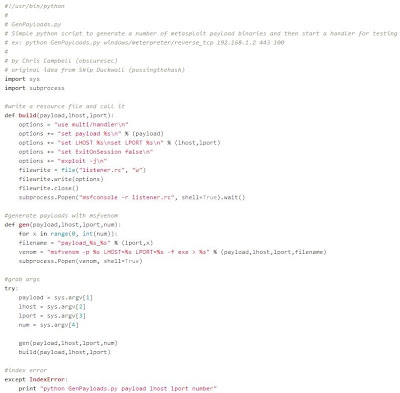 The python script is on github if you are interested in trying this out but your mileage will certainly vary based on the AV product. Over the years, it generally requires more payloads to be created to be successful. Sometimes its in the hundreds, but often its in the thousands. Be careful with disk space since the script doesn't account for that.