Retrieving NTDS.dit without a Shell on the DC

It has been increasingly common for organizations to prevent external or outbound connections from their domain controllers. I have seen some use the Windows Firewall, others use non-routable IP addresses and others have installed third-party software to prevent any type of remote access. These are all recommended practices, but some security administrators wrongfully assume that their domain hashes are safe simply because they believe that it is impossible to get a meterpreter shell on any of their DCs.

Sometimes you really have to work to gain Domain Admin privileges, and other times you don't. On more than one occasion (read 2) I have been able to guess a webserver password for Symantec NetBackup servers. The first time, there didn't appear to be a obvious way of converting that access to code execution, but one of the features of the product is the ability to generate custom reports. The report generation utility can be used to generate custom database queries against a Sybase database. Sybase typically runs as SYSTEM and can be used to run commands. Combine that with PowerShell and achieving a memory-resident shell, regardless of AV product,was trivial with PowerSploit.

Armed with a fully-privileged shell on a seldom used backup server, I was in business. First lets look at the tokens on the box: 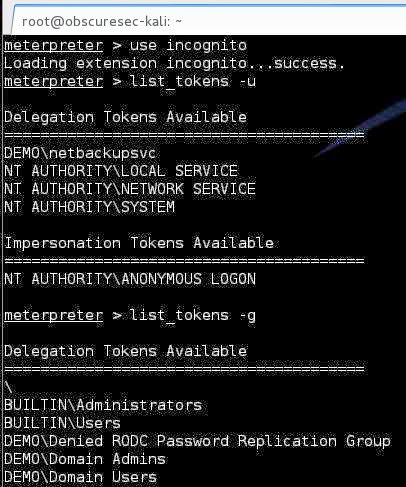 It looks like the service account is a domain admin and we can impersonate it by migrating into the netbackup service. Now its time to get the hashes and then start going after what really matters - the data. Unfortunately, I could not get the DC to initiate an outbound connection of any kind. Some combination of configuration and/or security products were preventing me from getting a shell on the DC. Without really knowing what is blocking our shells, we needed a safe way to dump the domain hashes. One method that is almost always AV-safe is to use built-in tools. There are write-ups on one method of copying the NTDS.dit, but I prefer a simpler one:

This technique relies on the Ntdsutil binary which ships with Server 2008, but may be found on 2003 servers as well. Next, we can do something similar to obtain the SYSTEM file and download them both with Meterpreter:

Armed with the database and SYSTEM files, you can continue with extracting the hashes offline. May not work in all situations, but it is another way to dump the domain hashes quickly once gaining "domain admin" rights.